This post is inspired by my son’s upcoming voyage on the Sailing School Vessel (SSV) Oliver Hazard Perry; he will be sailing from Boston, MA up to Portland, ME. 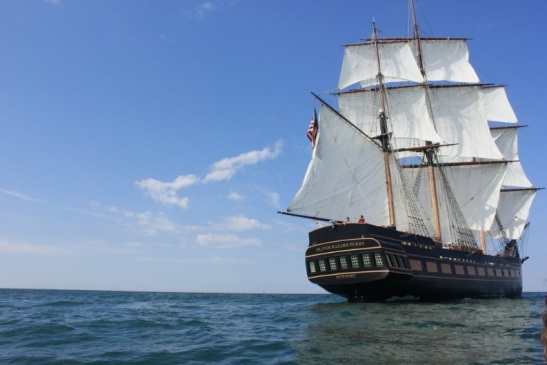 A house at 29 Touro Street in Newport that was purchased by Perry in 1818, serves as the ship’s headquarters. The tall ship is not an exact replica of those that Oliver Hazard Perry commanded but is inspired by them, with modern technology & conveniences. I worry about my 14 year old out there on the high seas without me but things were different when Oliver was a boy.

Sarah Wallace Perry (1791-1851), the third of eight Perry children was asked by her brother Matthew Calbraith Perry (1794-1858) to help author Alexander Slidell Mackenzie piece together a biography on Oliver. She thought she had little to offer since she had been deaf since birth and was six years younger than Oliver. Her letters though are full of observant and thoughtful accounts such as this one, dated February 19, 1840:

“My own remembrance of Oliver may be dated at the time we resided at Westerly, when I was from seven to eight years of age. That period, as connected with him, is impressed on my memory from the circumstance of his being in charge of the family during the whole winter, it must have been in 98, when our Mother accompanied our Father to Warren where he was superintending the building of the Genl Green., and where she was detained much longer than she expected to have been when she left home. Oliver had just entered his thirteenth year, but though so young, he conducted the affairs of the family, of whom Ann was then the youngest, with all the prudence and regularity of a man, attending, and seeing that we also attended school, and keeping up a constant correspondence with his parents, that they might be fully informed of every thing relating to the home. I have seen some of the letters written at that time, but do not know what became of them, or of many others that I should have been glad to have kept, and now perhaps might have been useful.

I can perfectly well remember seeing Oliver making purchases, and attending to the ordering of the family, the same as his parents would have done had they been at home, nor did we younger ones think of disputing his authority any more than we should have rebelled against theirs, and of this I well remember a proof. The pretty young woman, Sally Ely, who had charge of us, was engaged to a young man named Stephen Lanpheer, who frequently came to see her, and one day that he was there, he, perhaps for the purpose of teasing her, climbed on the roof of a shed, or lean to, as it was called. She was, or pretended to be, frightened at his danger, and of course infected you, and myself, who were looking on, with her fears. She tried to coax him down, but he seemed to pay no attention to her persuasions till at last, on his going so near the edge of the roof that probably she really was alarmed, she screamed out, “Come down this minute Stephen, or I’ll tell Oliver!” – and Stephen, thinking he had teased her enough, or not wishing to shew [sic] disrespect to the one in authority over us, instantly came down, much to our satisfaction, for we should have been very much astonished at any appearance of insubordination on his part, after such a threat.  Yet with all of this, Oliver was still a boy, and loved the usual play of a boy. For at this time, you and myself frequently stood at the window to see him, our Brother Raymond, and cousin George Perry, who was that winter staying with us, play at ball, and other games, before the house. His power as head of the family, so remarkable in one of his age, could therefore only have proceeded from his own command, and not from any undue assumption of manhood on his part.”

In the Spring of 1799, Oliver (at age 13) was appointed midshipman of the above mentioned ship, the USS General Greene on which his father, Captain Christophers Raymond Perry (1761-1818), was the commanding officer. Assignments continued with him assuming lieutenant roles on various ships for the next 10 years. In April of 1809, he was appointed Commanding Officer of the USS Revenge, his first real commission, enforcing the Embargo Act. On January 9, 1811, the Revenge ran aground off the coast of Rhode Island. While a court-martial exonerated Perry from blame, he decided to take a leave of absence from the Navy; during which time he married Elizabeth Champlin Mason (1791-1858) of Newport and enjoyed an extended honeymoon.

“Proceedings of a Court of Inquiry Held Aboard the U.S. Frigate Constitution for the Purpose of Enquiring into the Cause of the Loss of the U.S. Schooner Revenge.” (MSS 617 F1)

June 18, 1812- President James Madison signed a declaration of war with Britain & twenty-six year old Oliver was ordered for duty, taking command of the vessels in Newport. Perry was assigned to the defense of Lake Erie in January 1813 and quickly made the necessary arrangements for the construction of a fleet. On September 10, 1813, the British navy attacked in what became known as the Battle of Lake Erie. Perry’s flagship, the USS Lawrence, was soon overcome by British gunfire. However, instead of surrendering his flag, he and his men rowed a half-mile through heavy fire to transfer his command to the USS Niagara. With the Niagara he broke the resistance line and pounded the enemy’s ships until they surrendered. Perry’s victory over the British navy turned the tide of the war and opened the door for American soldiers to reclaim Detroit and defeat the Native Americans fighting for the British. Perry’s report to General William Henry Harrison was brief – “We have met the enemy and they are ours; two ships, two brigs, one schooner and one sloop”. 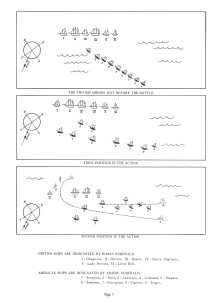 How the Battle was Won

The years after Lake Erie were spent in Newport, Baltimore, Washington DC & the Mediterranean. But it was while serving on a diplomatic mission to South America, where he negotiated an anti-piracy agreement with President Simon Bolivar, that he contracted yellow fever. Despite his crew’s efforts to get him to medical care, Oliver Hazard Perry died on board the USS Nonsuch on August 23, 1819- his 34th birthday.

News regarding the discovery of the USS Revenge wreckage: