Every once in a while a research question sticks with us. A few months ago we received a request from a patron looking into a bit of family lore that had been passed down for years. She referred to the story as the “Cream Puff Murder.” This did not ring any bells with our staff, but we were definitely intrigued by murder and sweet treats!
After digging in the local papers, we found the story of Hattie Oakley and her victims: Henry Cassavant and Almand Vadeboncoeur. This is a story of love, jealousy, and sweet revenge that ended with murder in Woonsocket, Rhode Island in 1916.

On January 26, 1916 Mr. Henry Cassavant of Woonsocket, Rhode Island received three cream puffs by special delivery mail. Though his brother chastised him for eating mystery food sent by mail, he ate two of them and gave one of the tasty treats to a friend, Almand Vadeboncoeur. 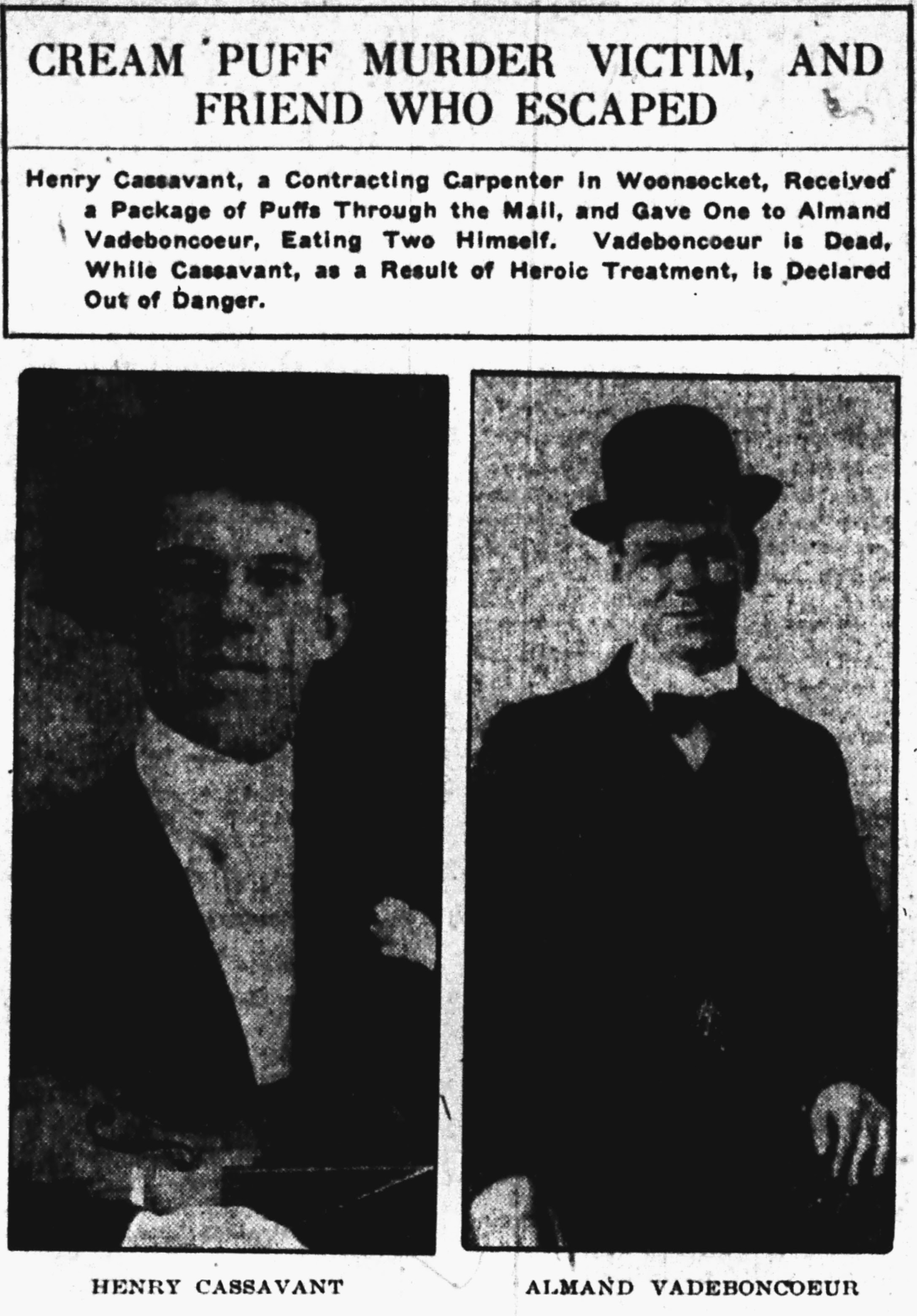 Later that evening, Mr. Cassavant became violently ill, leaving his date behind at the theatre to return home. Luckily his doctor suspected poisoning and was able to administer proper treatment. Mr. Vadeboncoeur was not so fortunate. Only eating one of the treats, his symptoms did not point so clearly toward poisoning. Mr. Vadeboncoeur’s doctor treated him for a stomach bug and his wife was told to call the doctor back if his condition worsened. The doctor returned at 11pm that same night and Vadeboncouer died shortly after.
The next morning, Dr. Jette, who had treated Mr. Cassavant, informed the police that they should get involved in this suspected poisoning. Odilon Vadeboncoeur, brother of the deceased victim, found the smoking gun – or rather the paper packaging in which the cream puffs were sent. The handwriting on the address looked to be a woman’s but also appeared to be intentionally disguised. After questioning Mr. Cassavant about who may have wanted to cause him harm, the police turned toward a female tenant and longtime associate of Cassavant. Ms. Oakley was a widow and mother of a teenage girl, her husband had died about a year in to their marriage. Henry Cassavant was a single man in his 30s working as a carpenter and the two had been seeing each other. Ms. Oakley considered herself engaged to Mr. Cassavant, though no mention of an official engagement was discovered in our research. Prior to the deadly delivery, Mr. Cassavant mentioned to Ms. Oakley that he had eaten homemade cream puffs made by another woman. He had also been out to the theatre and to dinner with her. Ms. Oakley allegedly tried to discover the name of the other love interest. Though she denied any jealousy or a hard feeling toward Mr. Cassavant’s other woman it would seem Ms. Oakley attempted to pin the poisoning on her. She also insisted that she loved Mr. Cassavant proving that she would not do him harm. He survived the attempted murder,  but Mr. Cassavant was paralyzed as a result of the poisoning.
On January 31, 1916 Ms. Oakley, age 39, was arrested on two charges: causing the death of Armand Vadeboncoeur and the attempted murder of Henry Cassavant.
Oakley’s lawyer, Mr. Carpenter, insisted that she was either innocent or could not possibly be of sound mind:

“…[Ms. Oakley] after two hours’ questioning by the police, after being arrested and being locked up and after going over her case with me, dropped on the board couch in a police station cell and immediately fell asleep. She remained sleeping until the time came for her arraignment in court that evening. Immediately after her arraignment she dropped on the board couch in a court house cell, after eating a sandwich and drinking a glass of milk and at once fell into untroubled sleep. No normal woman and particularly none burdened with the knowledge of having killed one person and possibly two, it seems to me would have done this.”
From The Evening Call, Woonsocket, February 8, 1916

According to the intake records for the Rhode Island State Institutions, she was “held for murder” on February 1, 1916. The case went to trial on June 1, 1916, but pleading no contest Ms. Oakley was given a 20 year sentence and sent to the State Prison.

In February 1932, Hattie Oakley concluded her time in prison, but we yet to discover what happened to her after this.
The full articles from the Woonsocket Call can be accessed at the RIHS Robinson Research Center to view the newspapers on microfilm.
~Michelle Chiles, Research Center Manager