In the process of helping to create a year of programming based on “Rhode Island at War,” and as a member of a re-enacted Revolutionary War regiment, I hear and think a fair amount about the need not to glorify or romanticize war. I don’t always hear a counter point about remembering what war means, and still less about remembering the men who served. “We’re not glorifying war, are we?” someone asks, and feels they’ve done their duty.
That’s not enough, not really. What about remembering the effects of war, beyond treaties made and boundaries changed, the effects of fighting a war on the men who serve? An organization I belong to, the Brigade of the American Revolution, is dedicated to recreating the life and times of the common soldier of the American War for Independence, 1775-1783. I mention this because what I think is most important is the adjective common. Officers get fancier uniforms and better food, larger tents and nicer equipment. There were also far fewer of them. We have more diaries and letters from officers, more personal effects and portraits. What we do have for the common soldiers, aside from the amazing and idiosyncratic journal kept by Jeremiah Greenman of the 2nd RI, are records. In considering the men who served, and what happened to them, we are fortunate to have, in the transcribed Records of the State of Rhode Island and Providence Plantations, a “list of Invalids resident in the State of Rhode Island, who have been disabled in the service of the United States during the late war, and are in consequence thereof entitled to received a monthly pension during life.”  This list was assembled after the Congressional act passed June 7, 1785 establishing pensions for wounded veterans. The list includes the soldiers’ names, monthly pay, age, rank, and Regiment (or Corp or Ship) in which they served, as well as the disability and its causes. The range is moving, and all the more so because the injuries often make real the simple facts we absorb as early as grade school: Washington’s soldiers had no shoes. Here is Joseph A. Richards, Corporal, age 37 in 1785, who served with the Rhode Island Regiment commanded by Jeremiah Olney. “Loss of part of all the toes on the left foot, by reason of severe frost when on the Oswego expedition, commanded by Col. Willet, in Feb., 1783; also a wound in the knee in the battle of Springfield, June 23, 1780.”
Richards is not the only man to have suffered from frost on the Oswego expedition. Oswego! I had to look at a map; the last time I’d heard Oswego named was in Room Service. Oswego, as geographically-savvy readers will know, is a port city on Lake Ontario, home to a fort held by the British throughout the revolution, despite being challenged by the Americans. Let us take a moment to consider how far from Rhode Island Oswego, New York actually is (about 330 miles), and that Corporal Richards would have walked there, and that the action in Oswego took place in January and February 1783, and that Oswego is in a region well-known for snow fall.
Other disabilities call to mind the shabby condition and privations of Continental Soldiers. Benvil Laroach, born in 1746, Sergeant in Olney’s Regiment, lost the use of his left arm “by reason of a fall from a sleigh when on public service, after clothing for troops, from Saratoga to New Winsor, in January 1783.” Washington’s soldiers were dressed in rags. January of 1783 is very nearly the end of the war, and this disability resulted from a fall while going out to get clothing for the troops. This is dull business, but very necessary.
These are but two examples of young men, men who would have been just 30, or thereabouts, when they enlisted. There are older men, too, and we forget that men of all ages served. An excellent additional resource is the Regimental Book, Rhode Island Regiment, 1781 Etc. recently published by Bruce MacGunnigle, Cherry Bamberg, and the R.I. Society of the Sons of the American Revolution.
William Parker, age 69 in 1785, Private in Olney’s Regiment: “A very bad rupture in the groin, occasioned by a fall, when on a march from Red Bank to Mount Holly, in November, 1777, together with the infirmities of old age, which renders him incapable of obtaining a livelihood.”  1777 is the year of the Defense of the Delaware, when Washington’s army tried desperately, and ultimately failed, to keep Philadelphia from falling to the British. The march from Red Bank to Mount Holly was a retreat following battles at Red Bank and Fort Mifflin on the Delaware River, when the army headed to winter quarters. The following summer, at the excruciating Battle of Monmouth, George Bradford, serving under Colonel Israel Angell, received the wound that caused his disability: “A lame arm, occasioned by a wound received in the battle of Monmouth, June 28, 1778, which fractured the bone and renders the arm weak, and the wound has several times broken out, per certificate from Dr. Mason.” Bradford would have been about 21 when wounded. 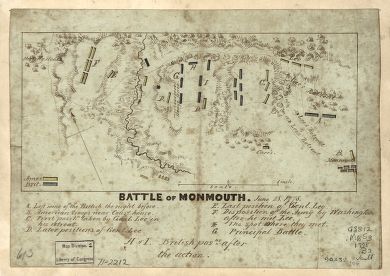 When I think about opening an exhibit on June 28, the 234th anniversary of the Battle of Monmouth, and celebrating the opening with cake and punch, I have a sense of unease. How can we celebrate such a miserable anniversary, of a lengthy and confusing battle fought in heat that reached over 100 degrees Fahrenheit, a battle that got Major General Charles Lee a court martial, and resulted British official losses of 65 killed, 59 dead of “fatigue”, 170 wounded and 64 missing, and American losses of 69 killed, 161 wounded and 132 missing (37 of whom were found to have died of heat-stroke).
Bradford was but one of 161 wounded, out of an estimated 11,000 American soldiers.  Losses were fewer than in a comparable Civil War battle because of the inaccuracy of smooth-bore muskets in the Revolutionary War period. That the men lost were a smaller percentage of the whole force makes them no less important, or meaningful, than any other loss or casualty in battle. To die of heat stroke in battle is still to die in battle; to suffer for the rest of your life from a wound received while collecting clothing for troops is still to be wounded and disabled. Let us take a moment to remember all the soldiers present and past, their sacrifices great and small, and thank them for all they have done for those of us lucky enough to remain in the comforts of home.
~Kirsten Hammerstrom, Director of Collections